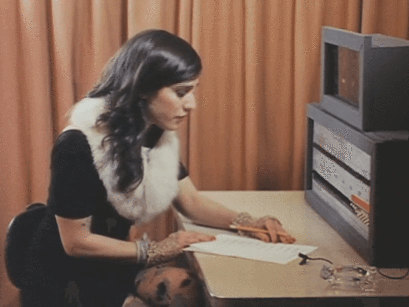 A Good Night’s Sleep is a monthly screening series featuring film and video by artists connected to Western Massachusetts. Our series connects a wide variety of non commercial forms and perspectives through collaboratively and deliberately curated programs. While most works fall into the broad categories of “experimental” and “documentary,” our priority is in building thought provoking and subversive programs regardless of genre.

The reliability of our monthly events has helped establish a community invested in learning through one another’s films and supporting the creation of new work. Frequent communication between makers and curators has brought about natural collaboration and risk taking; artists will finish a film to show at GNS based on ideas we talk about forming in a program, and our curatorial ideas can be influenced by a film that is still in the process of being made. We often screen works in progress, fostering a space for productive viewing. These types of generative practices are central to the mission of our collective; we see our series as a platform for experiments in collaborative film making and curation. You can learn more about our series and it’s programmers on our website: https://goodnightsleepseries.wordpress.com/

This Month’s Featured Artists Include:

Zoë Dong is a student at Smith College studying art and film. She is a native of Akron, Ohio and has slowly but surely fallen in love with Western Massachusetts during her time at college. Her artistic interests include concepts of bodies, female anger, in-between identities, and love of all kinds.

Colby Makin lives in Easthampton with his two beautiful dogs. His work deals primarily with obsession, happy accidents and half-truths.

Aisha Amin is a NYC native, graduating from Smith College in May. She is an aspiring investigative journalist and filmmaker and has strong interest in using documentary film and video installation to expose issues like criminal justice reform, race/identity, and civil rights.

Carl Elsaesser is a practitioner currently residing in Iowa. His short films have screened widely and have won numerous awards including the Barbara Aronofsky Latham Award for Emerging Experimental Video Artist at the Ann Arbor Film Festival in 2016, the Rozen Grand Prize at the Binghamton Film Festival, and a jury award at the Haverhill Experimental Film Festival. His work is concerned with how images are constructed, encountered, and interpreted, but rather than getting pigeon holed into questions of representations of the real, his work is ultimately interested in what is allowed to be real, and who is allowed to speak for this real.