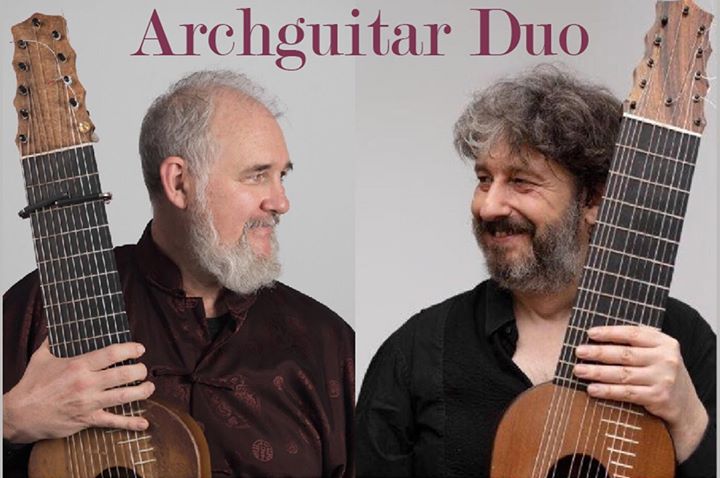 The Northampton Center for the Arts is thrilled to present Peter Blanchette bringing home his latest musical project which he started in Europe. Significantly, Blanchette has formed a new archguitar duo with renowned Spanish guitarist Mané Larregla. They will perform Blanchette’s arrangements of Bach, Scarlatti, Rameau, Vivaldi, and 15th and 16th century dance music.

Peter Blanchette is the inventor of the 11-string archguitar. Blanchette is an award-winning composer and veteran performer at high profile venues such as Spain’s Festival de Guitárra de Cordoba, NPR’s A Prairie Home Companion, WGBH, Boston Symphony Hall, The Kennedy Center for the Performing Arts, and the Heifetz Institute. His diverse recordings appear in many prime time television and movies, including “Sex in the City,” “Royal Pains,”and John Turturro’s film, “Illuminata.”

Mané Larregla is a native of Madrid, Spain and an acclaimed electric guitarist and producer. He is credited on dozens of recordings such as “Donde más Duele”, María Jiménez’s best-selling record. He toured with the great West African singer Mariem Hassan. He has composed for National Geographic’s “El Latido del Bosque.” He and Peter Blanchette met while they both played in Sinfonity, the all-electric guitar orchestra based in Madrid.

Tickets for the concert are $20 (general), $30 (preferred), and $15 (students with valid ID). Advance purchase is recommended on Brown Paper Tickets. Remaining tickets will be sold at the door at 33 Hawley Street, Northampton one hour before the performance time.