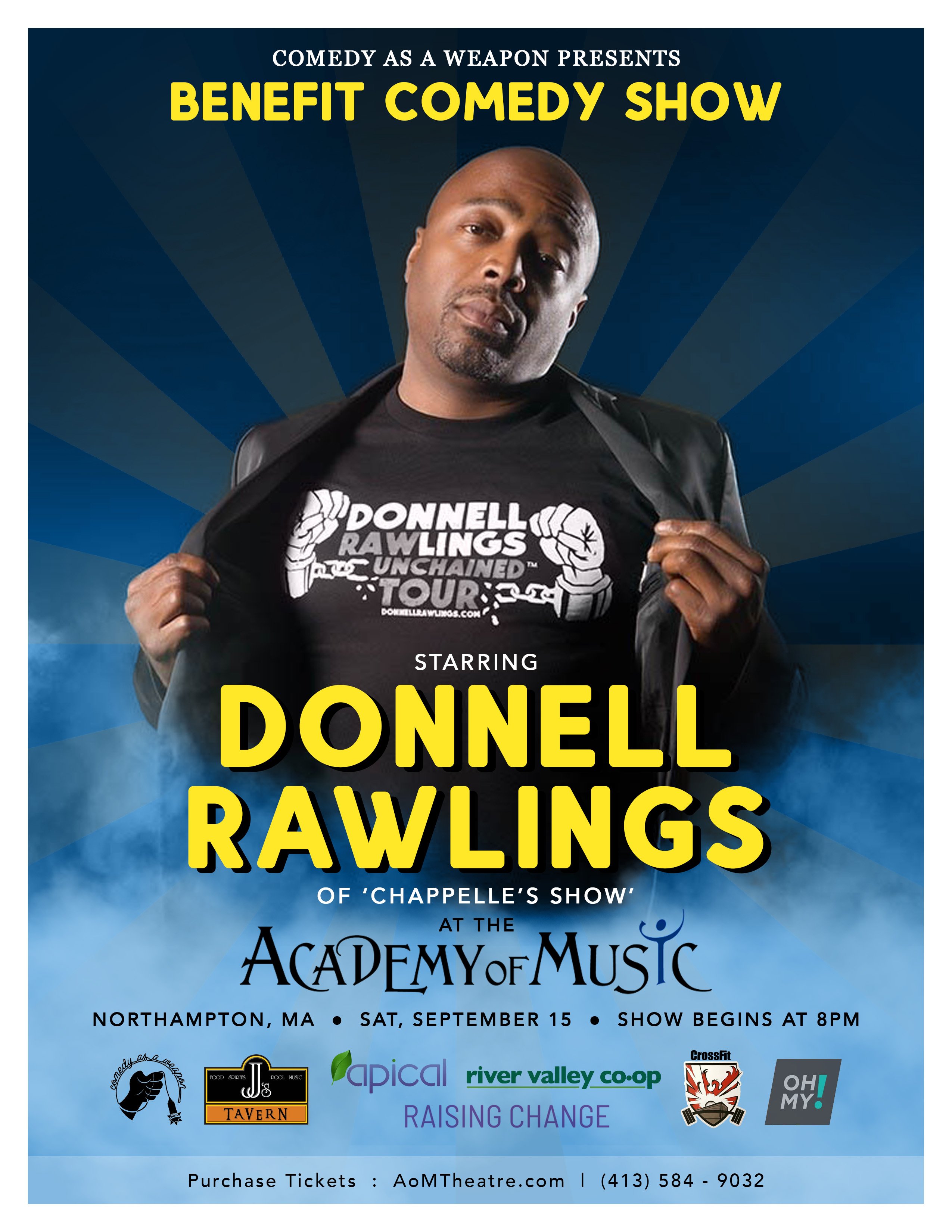 2nd Annual fundraiser Presented by Comedy as a Weapon

We are proud invite you to the Academy of Music for one spectacular night of comedy starring the one and only Donnell Rawlings from the Chappelle Show. Tickets go on sale July 2nd. Just by attending this event you are helping us raise money for the Northampton Survival Center as they get a portion of the proceeds. The night of laughs we be hosted by Comedy as a Weapon founders Tim Lovett and Kim “Boney” DeShields, and if that is not enough the jazzy juggernaut Mary Jane Jones band is set to open the show. Comedians Barry Ribs and Kendall Farrell add to roster and music will be provided by the DJ Groove.

Donnell Rawlings is an overnight success a decade in the making. He made a splash in the DC comedy clubs going from a heckler in the audience to HBO’s Def Comedy Jam in a period of six months. You’ve seen him as ‘Ashy Larry’ on Comedy Central’s award winning and critically celebrated Chappelle’s Show, where he joined Dave Chappelle as both as a writer and performer. He will also be featured in Queen Latifah’s new movie Percentage. His 1-Hour Stand-Up “Ashy to Classy” premiered on Comedy Central in October of 2010. He was a co-host on both Power 105’s (NY’s #1 Hip Hop and R&B radio station) morning show “Egypt and Ashy in the Morning” and “The Big Tigger Morning Show” on WPGC in Washington DC, and he enjoyed weekly guest appearances on New York’s Hot 97 Morning Show. He was a regular on E!’s “Chelsea Lately,” starred in Comedy Central’ “Reality Bites Back,” and was the resident “Funny Guy” on the Ricki Lake Show. In 2007, Donnell co-created and starred in Heavy.com’s hit web series “From Ashy to Classy”, which was picked up for a second round of episodes. His movie of the same name screened at the 2011 L.A. Comedy Shorts Film Festival. As an actor Donnell has also appeared in the Law &amp; Order series, Special Victims Unit (SVU) and Criminal Intent (CI) as well as NBC’s Third Watch, the Emmy-Award winning HBO Mini-Series: The Corner and as Day-Day Price on HBO’s Emmy-Award winning series “The Wire.” On the big screen he could be seen in the blockbuster Spider-Man II.