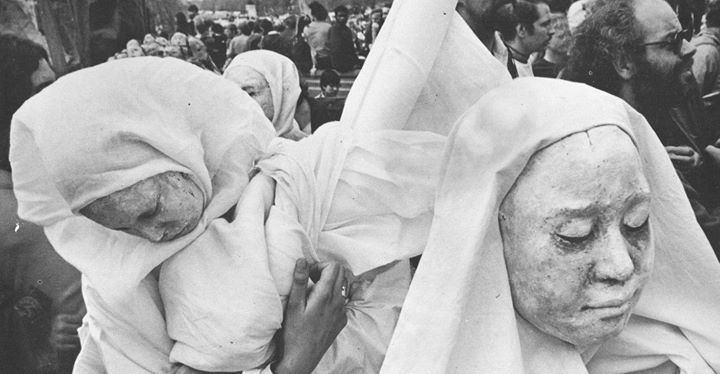 Vermont’s rabblerousing Bread and Puppet Theater returns to Northampton this month with Diagonal Life: Theory and Praxis, which examines our current precariously diagonal condition – on the verge of collapse, yet always capable of uprising.

“The vertical is the exceptional human predicament, the up and forward striding ambition that manufactures history and warfare”, says Peter Schumann, Bread and Puppet’s founder and director. “The diagonal results from the hurts that the verticals suffers in the process. It is out common human fate, the hard to sustain in-between-life, neither up nor down.”

We inhabitants of Western modernity are no strangers to verticality, from the architecture of our cities, to the “ladder(s) of success” we’re expected to scale, to the incessant wakefulness required of us, postponing the horizontal pleasures of sleep. Bread and Puppet’s Diagonal Life presents the diagonal as a potent and promising opposition to the dominating verticality of our culture.