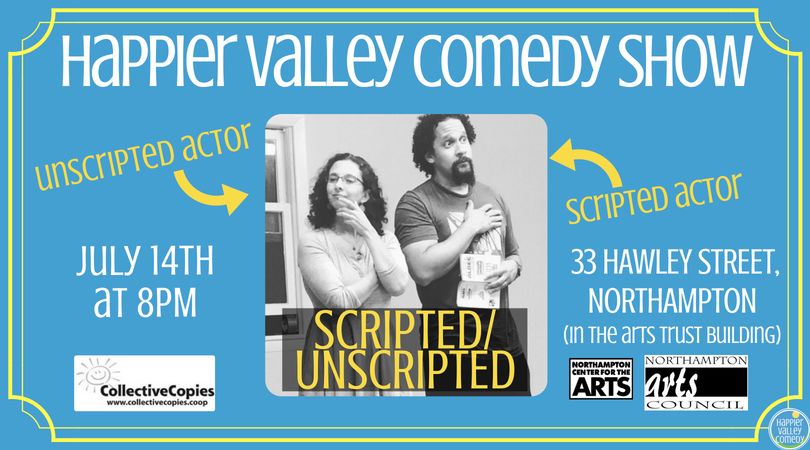 Some people call it an actor’s nightmare, but some of the Pioneer Valley’s premier actors call it a high-flyin’ night of staged adventure. And nobody knows how it’s going to turn out until the show begins. Happier Valley Comedy’s production of SCRIPTED/UNSCRIPTED combines one actor performing from a script line by line with one improviser making it all up on the spot because they have no idea what play the actor is reading from. The results are one wild and wooly show… and their most popular. “With a cast of 12 teeming with talent, this show always attracts lots of attention,” says Pam Victor, Head of Happiness of Happier Valley Comedy. “It’s by far our most popular show.”

Victor attests to the fact that the improvisers do not have any idea what they’re walking into… and the actors have no idea where the scene will go. “We rehearse with different scenes, just to get practice in going with the flow. But the actors are super secretive about what play they pick for the show itself. I don’t even know, though I suspect there are locked vaults and secret passwords involved.” In rehearsal, scripted and unscripted performers practice letting go of the plot and allowing the scene to evolve into something totally new. “The actor might be reading from a scene about two strangers sitting on a bench,” explains Victor. “But if the improviser enters the scene with ‘Hi Mom!’ then the whole scene flips. And we’re off on some crazy adventure!” If all goes according to plan, this show will be the final Happier Valley Comedy Show in Northampton before their move to Happier Valley Comedy’s new theater in Hadley.

SCRIPTED/UNSCRIPTED will be performed on Saturday, July 14th at the Northampton Center for the Arts’ downstairs space at 33 Hawley Street in Northampton. Tickets are $13 at the door. Doors open at 7:30pm. This show features the scripted actors Stephanie Carlson, Michael Charland-Tait, Matt Haas, Moe McElligott, Cate Damon, and Kyle Boatwright and unscripted actors Scott Braidman, Kelsey Flynn, Laura Patrick, Christine Stevens, Paul McNeil, and Maile Shoul. The show is being sponsored by Collective Copies. This program is supported in part by a grant from the Northampton Arts Council, a local agency which is supported by the Massachusetts Cultural Council, a state agency.