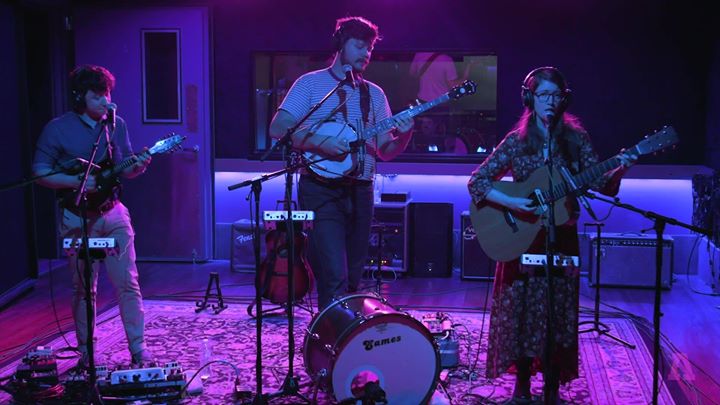 Honeysuckle is a progressive folk act that blends older influences and traditional instrumentation with modern effects and inspiration. Comprised of Holly McGarry, Benjamin Burns, and Chris Bloniarz, the trio can frequently be found performing in the Boston area and surrounding cities in the Northeast, playing alongside bands like Drive-By Truckers, The Ballroom Thieves, Boy & Bear, Sam Moss, The Western Den, The Novel Ideas, Shook Twins, John Craigie, Grey Season, Damn Tall Buildings and others. In 2015, Honeysuckle performed at Newport Folk Festival, was chosen as a Converse Rubber Tracks artist, and was nominated for Best Folk Artist of the Year, and Best Americana Artist of the Year at the annual Boston Music Awards. In 2016 the group played Lollapalooza on the Pepsi Stage as well as CMJ in New York City.They have also been nominated again for the categories Best Americana and Best Folk Artist at the 2016 Boston Music Awards, as well as new nominations, Americana/Roots Act Of The Year and Album Of The Year for Red Line Roots’ 2016 Big Reds. As a recipient of Club Passim’s Iguana Music Grant, Honeysuckle recently released a new full-length album on March 24th, 2016 to a sold out crowd at Club Passim. Also available is their debut EP, “Arrows,” released on April 29th, 2015.

Praised by NPR for their “upbeat, poppy vibe; energetic, driving rhythms” and “virtuosic solos,” Twisted Pine has quickly become one of the most acclaimed young string bands in the Northeast. Audiences across the US and UK have been drawn to their forthright songwriting, lush harmonies, musical daring, and charismatic appeal.

Steeped in traditional music, these musicians are also fearless, tuneful improvisers and passionate lovers of pop. Fiddler Kathleen Parks’ command of the vocal mic is as charming as it is gutsy. On her instrument, Parks is an insatiable risk-taker, seeking out exciting new musical territories. Mandolinist Dan Bui is a master of melody and drive, celebrated widely for his dexterous, tasteful picking. And bassist Chris Sartori holds down the low end and a lot more, introducing creative, funk-inflected cadences that never overwhelm the beat.

But while it’s easy to celebrate each of the band members individually, Twisted Pine is more than a collection of talented musicians – it’s a unit that grooves together. Their intricate arrangements of swelling, syncopated rhythm and precise instrumental interplay bring the enveloping sound and hooks of indie pop to an acoustic instrumental setting.

You’ll find Twisted Pine on stages large and small, entertaining festivals of thousands and intimate rooms alike. Winners of the 2018 Boston Music Award’s Americana Artist of the Year and selected as one of Improper Bostonian’s 2018 “Top 10 Local Acts on the Rise,” Twisted Pine has played major events from Grey Fox to DelFest to Glasgow’s Celtic Connections and beyond. “They absolutely rule their musical world with humor and relish,” says legendary fiddler Darol Anger.

Twisted Pine released its debut, self-titled album of original music in 2017, followed in 2018 by Dreams, an EP of “wildly innovative covers… full of spark, light, and irresistible force” according to PopMatters. Check out Twisted Pine on tour and see why the Boston Globe calls them “a wider version of stringband, boundary jumpers akin to outfits like Punch Brothers, Nickel Creek, and Crooked Still.”