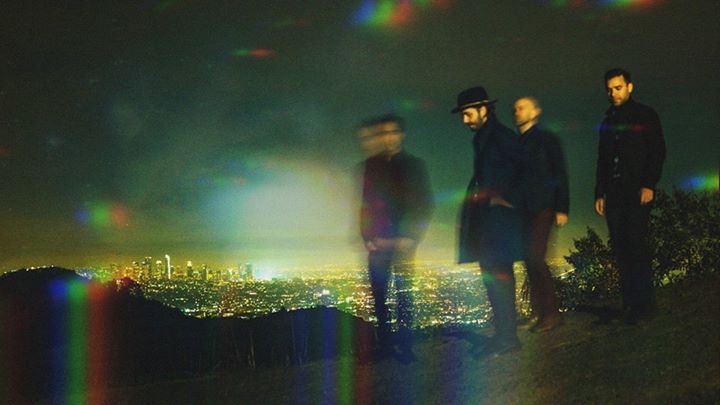 Unburdened by contractual obligations and working at their studio and informal clubhouse Whispering Pines in Los Angeles, Lord Huron found the freedom and comfort to pursue their vision without compromise. The result is Vide Noir: a sonically bold, bravely-executed saga that pushes the band’s sound in ambitious new directions.

Singer, songwriter and producer Ben Schneider found inspiration wandering restlessly through his adopted home of Los Angeles at night. His aimless nocturnal journeys ranged all over the city – across the twinkling grid of the valley; into the creeping shadows of the foothills; through downtown’s neon canyons; way out to the darksome ocean. The resulting collection of songs feels like an epic odyssey through the city, across dimensions and out into the cosmos.

Many of Vide Noir’s songs were tested on the road as early as 2016 and honed with a jeweler’s precision into their final form. Dusty ballads share space on the album with punky rippers, ‘50s sock-hop sways and ethereal electronic passages. Each entry is a glinting star, and together they form a sonic constellation examining the search for meaning amidst the cold indifference of the universe.

Vide Noir was mixed by Dave Fridmann (The Flaming Lips/MGMT) and engineered by Sonny DiPerri (Portugal. The Man, Animal Collective). The album honors the traditions of both rock and folk as it embraces modern studio techniques. The stylistic experimentation speaks to Lord Huron’s confidence as storytellers and as craftsmen, armed with a growing array of tools.

Lord Huron’s work always comes richly adorned, and Vide Noir is no exception. The album will be accompanied by a wealth of imagery, films and immersive experiences crafted to expand upon its narratives and themes. A true multi-media artist, Schneider has previously used videos, a comic book, a choose-your-own-adventure hotline and assorted Easter eggs as means of deepening the listener experience. Fans steely enough to confront the ineffable have already uncovered a few of these accoutrements.

Lord Huron was created by Los Angeles-based Ben Schneider. Born and raised in Michigan, Schneider drew inspiration from the Great Lakes, which were carved by glaciers 14,000 years ago, and his music stands in awe and wonder of the natural world.

After writing and recording two independent EPs (Into the Sun and Mighty) on his own, demand grew for Lord Huron to perform live. Schneider recruited friends Mark Barry (percussion), Miguel Briseño (bass) and Tom Renaud (guitar). Having first played music together at the tender age of 12, the group reunited and quickly hit their stride, transforming the project into a full-fledged band. Lord Huron signed with IAMSOUND, and the label released 2012’s Lonesome Dreams, and Strange Trails in 2015.

Strange Trails included the song, “The Night We Met,” which was featured in the Netflix original series “13 Reasons Why.” The series and song both became hits, and “The Night We Met” was certified platinum in January of 2018. This year also marks the beginning of a unique alliance between Whispering Pines and Republic Records, who will partner in the release of Vide Noir.

Lord Huron has toured extensively in North America and Europe, earning rave reviews and performing for sold-out crowds at some of the world’s most prestigious venues. The band has appeared at a wide range of music festivals including Lollapalooza, Coachella, Bonnaroo and Newport Folk Festival.