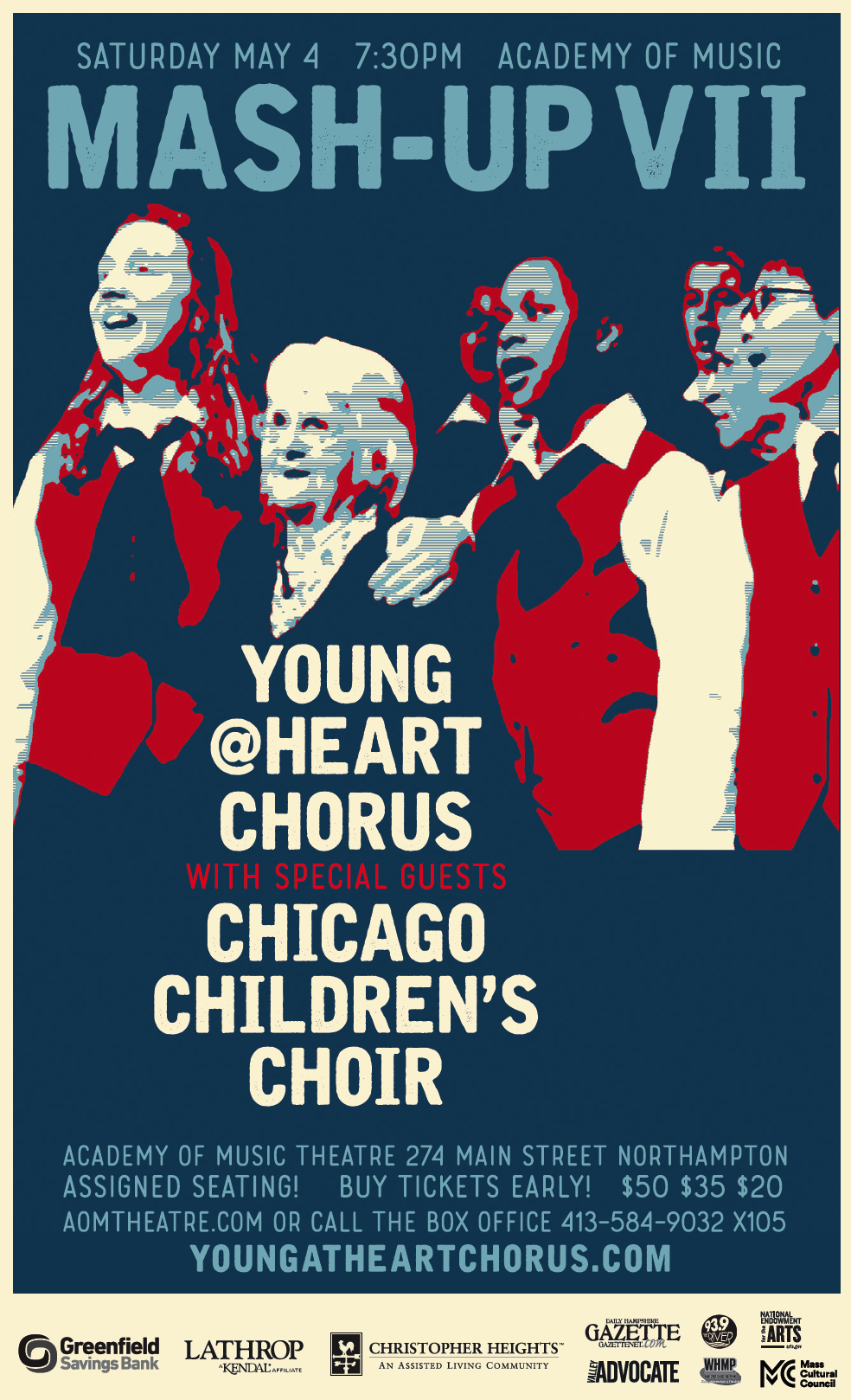 The Young@Heart Chorus (Y@H) and Chicago Children’s Choir (CCC) team up once again for Mash-Up VII on Saturday, May 4 @ 7:30PM at the Academy of Music Theatre, Northampton MA. Tickets are available at aomtheatre.com or by calling the Academy box office at 4134-230-9032 ext. 102

Y@H and the CCC close the generation gap in Mash-Up VII. The choruses are world renown for their commitment to changing lives through music, albeit from different stages of life. The Choruses will sing separately and together. Together they will explore music from Matisyahu to the Specials and Manhattan Transfer to Chicago’s own, Sly and the Family Stone…and much more.

The Hyde Park Neighborhood Choir of Chicago Children’s Choir is one of the shining lights of the South Side of Chicago. CCC Director Mollie Stone, who attended Amherst College, describes the impact of the collaboration:

“When our Chicago Children’s Choir Hyde Park Neighborhood Choir toured to Northampton, Massachusetts in 2014 to collaborate with Young@Heart, our singers’ lives were transformed. For the first time, they realized that the powerful experience of singing together and creating community within the context of an ensemble was a gift they could share for their entire lives. They started to understand that their music- making truly functioned as a way to create community with people from any background, any age, and any part of the world. Our singers had been performing for their elders at senior centers around Chicago for years, but had never had the chance to see their elders as fellow performers, and collaborators. Witnessing an entire ensemble of elderly singers coming together to sing music from genres that are usually perceived as belonging to the “younger generation” also gave our singers an important understanding that one can cross the imagined boundaries imposed on us by society—that they have the ability to learn about any type of music, and connect with the people who love it, and perform it.”

Chicago Children’s Choir (Josephine Lee, President and Artistic Director) is the nation’s preeminent youth choral organization, serving over 5,000 students across the city of Chicago. Founded in Hyde Park in direct response to the Civil Rights Movement in 1956, CCC has grown from one choir into a vast network of in-school and after-school programs driven by one mission: to inspire and change lives through music.

What started out in 1982 at a Western Massachusetts elderly housing project to joyfully pass the time instead of passing before your time has developed into the stereotype- defying, generation-crossing musical extravaganza better known as The Young@Heart Chorus. From The New York Times to TIME, The Tonight Show to The Ellen Show and stars of the Fox Searchlight Top 50 all-time documentary, Young@Heart, this group of fearless seniors, ranging in age from 73- 92, has toured from Northampton to New Zealand, Europe to Japan. Featured in E*Trade’s acclaimed Super Bowl ad This Is Getting Old (2018), Young@Heart continues to wow audiences worldwide while conducting weekly rehearsals and concerts with incarcerated singers in two local prisons through their PrisonVision program launched in 2014. In their annual Mash-Up concerts, they collaborate with the best youth performance groups, including Staten Island’s PS22 Chorus, Chicago Children’s Choir, and the Brooklyn Youth Chorus.