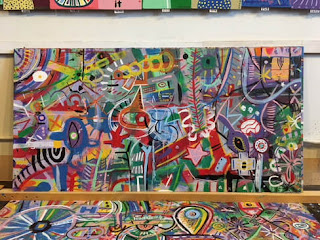 Luke Cavagnac has a well-known presence in Easthampton, where his colorful, pop-art style can be seen on a big mural at 123 Cottage Street, on the side of the building that faces the entryway into Easthampton’s Cottage Street Cultural District. Working out of his “Invisible Fountain” studio in Eastworks, Cavagnac has concentrated on producing affordable and accessible works that also have a sense of humor. (Image above by Luke Cavagnac)

Jil Crary-Ross is an NYC based painter. Jil explores the relationship between identity, the built environment, and form to create an account of new Americana. Process, ritual, utility, and decay are central to Jil’s material vocabulary.

Maclyn Milsark currently lives in Brooklyn and finds himself regularly noticing different patterns; in different spaces, in ways of speech, in earning and spending, and interactions between objects, living or inanimate. Maclyn studied at Pratt Institute, where he broadened his working mediums.

Kevin Pomerleau’s work focuses on telling stories through contemporary textiles that have inhabited spaces during relevant periods in his life. Ranging from topics such as isolation, relationships, and the plights of the queer community Pomerleau’s work hopes to convey a narrative that entices the viewer to look into his world without ever actually allowing them to enter.