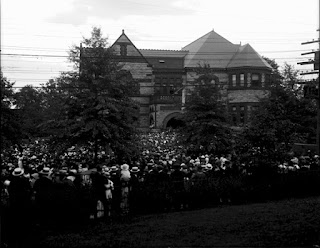 Northampton Senior Services is joining forces with Forbes Library in planning a large community sing on the lawn of Forbes Library for the fall of 2018. We’re hoping that you can attend the March 9 Group Sing led by local guitarist F. Alex Johnson to learn more about this project and how you can be a part of this celebration through song.

During 1918 as World War I was ending, the trustees of Forbes Library granted use of the library grounds for several large gatherings of Northampton citizens for “Community Sings,” primarily of patriotic songs.

The Gazette reported that the community sing of June 24, 1918, attracted a crowd of five to six thousand people! Spirits were high, automobiles were parked along West Street, and the view from the embankment on Smith College grounds was a maze of white blouses, long skirts, straw boaters, and 3-piece suits along with high school cadets and 2 drum corps. (See attached photos.)

Forbes Library plans to commemorate the 100th anniversary of the end of “the war to end all wars” by gathering again on the library lawn to raise spirits, support peaceful resolutions of conflicts, and confirm our sense of community by singing together. The large group sing will combine voices of individuals and singing groups in the area. Everyone will learn the same 3 songs and come together to sing in unison on the lawn, much in the same way the Library selects a book each year for all the entire community to read and then to gather and discuss. Our Community Sing will not be a performance, but a participatory, community event. 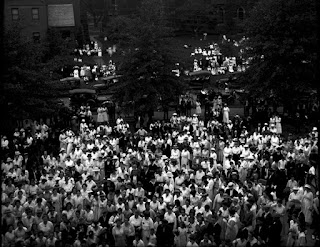 In the fall of 1894 Forbes Library opened its doors for the first time. Its 125th anniversary in 2019 will be the occasion of multiple events and celebrations. It will all begin next fall with this joint celebration to both commemorate the 100th anniversary of the end of World War I in 1918 and to sing together with your friends and the entire Northampton Community.

In addition to the Group Sing at APE Gallery on March 9, individuals interested in participating in the fall community sing are invited to attend an information session at Forbes Library on March 14 to learn more about the project and to provide feedback to help us shape the event. Go to Our Community Sing 2018 | Forbes Library for more information about Our Community Sing as it develops