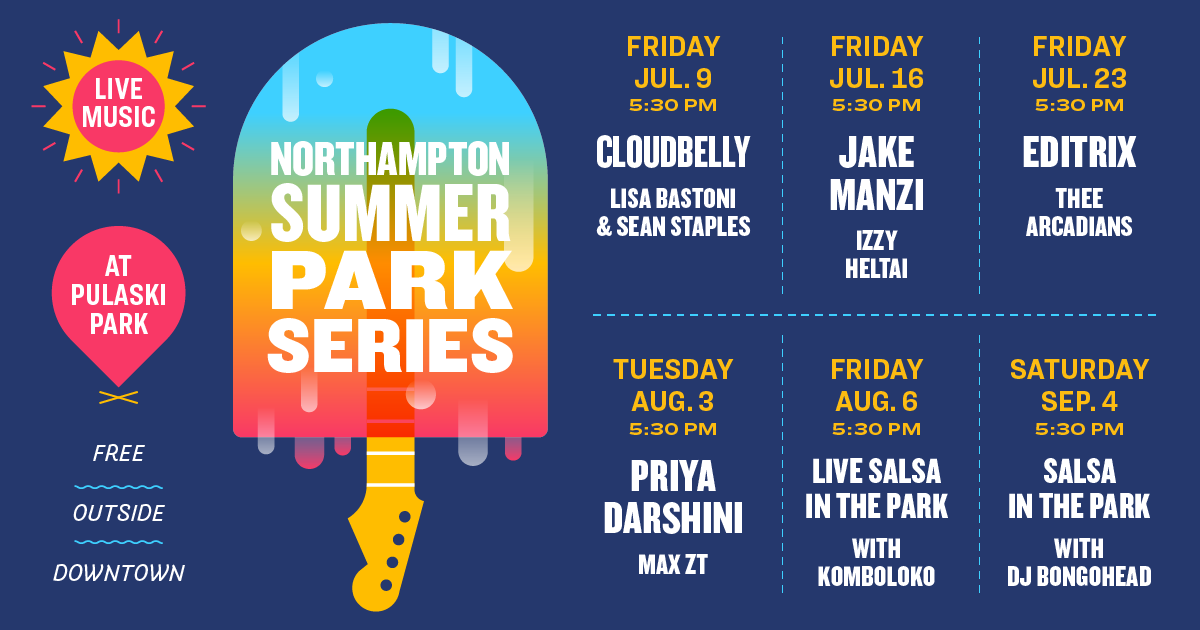 Come out to enjoy long summer nights in Downtown Northampton with free live music in Pulaski Park! The Northampton Arts Council, in its sixth year of presenting concerts in the Park, continues a long-held musical tradition that dates back to the 1970’s. Join us for live music and dancing in our beautiful park. We are presenting six shows this summer in July, August, and September. Shows start at 5:30pm and go until 7:30pm.


Editrix
Rather than get stuck in the miasma of genre definitions while the world burns, Editrix have crafted nihilistic anthems that embrace familiar and fun pop songwriting even as it crumbles to bits. The Western Massachusetts trio’s debut album, Tell Me I’m Bad (released February 5th via Exploding in Sound), darts and tumbles between apocalyptic love song and ethical quandary, playfully picking from and decimating influences ranging from Anthony Braxton to Captain Beefheart along the way. Wendy Eisenberg (guitar/vocals), Josh Daniel (drums), and Steve Cameron (bass) formed Editrix in early 2018 as a way to explore the outer edges of the rock pantheon beyond their respective bands. Rather than bridging the gaps between party rock, noise, jazz, and prog, the resultant “avant butt rock” rabble-rousing moves in pocket dimensions between them. “We’re a bunch of sidepeople that decided to form ourselves into a compositional experiment,” Eisenberg says. “We all love different music and play in different bands, but our collaborative songwriting has trended towards elaborating on pop forms. We want to annihilate indie rock.”

Thee Arcadians
“New England has a long tradition of teenagers being raised in caves. Local histories are rife with descriptions of shaggy teenage gangs appearing in towns and hamlets, usually in late Autumn, causing massive amounts of trouble before disappearing once more into the hills. The members of Thee Arcadians count no literal cave-dwellers amongst their number, but the semiotic weight of their message is as raw and subterranean as any you will hear this year. The band is young, but most of the members have been playing in various configurations since not long after ditching their diapers. We’ve been hearing rumbles from them for as long as we can remember. But it’s only with the formation of Thee Arcadians, and their decision to stick around and work on their material for a (relatively) good long while, that we’re really able to appreciate how far they’ve come. The material on this debut album wears some of its debts on its sleeve (Mummies, Ty Segall, etc.), but there are lots of wild tongues buried in the rush of raunch here. The album is a sweet slam to the side of your head, and will make you see stars in a whole new way. Packed in a lovely Gary Panter cover, this is what you always hoped New England Cave Teens would sound like. Dig It” —Byron Coley, 2015