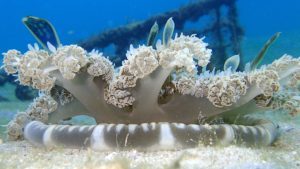 Half of America by Ray Radigan
‘Secrets of the Sea’ Underwater Photography by Shannon E. Ryan
Portraits and Drawings by Lisa Yeisley

It was on long, cross-country drives that Ray Radigan first glimpsed the American struggle between hope and despair that became the inspiration behind his paintings. His oil paintings of buildings depict this struggle: to repair or to demolish. They are not intended as commentary, only as observations. Each has its own history and tells a different story. Together, they help to exemplify a nation’s people caught between optimism and surrender.

After growing up in Pearl River, NY, Ray attended SUNY New Paltz where he studied art education. He earned his masters degree in illustration at the Academy of Art University in San Francisco. Since graduating in 2008, he has worked for the National Park Service and non-profit museums on illustration and design projects. In 2013, he began painting his “Half of America” series.

Secrets of the Sea by Shannon Ryan: “Since I was 7 years old I have been deeply drawn to the ocean and the life it holds. As I grew older I became aware of just how vast and intricate the oceans really are, how all life is connected to the oceans, and how we as humans are treating this crucial part of our existence. My main goal in sharing my photographs is to bring both awe and knowledge to the public. I want people to be aware of the ‘Secrets of the Sea’ and understand their role in sustaining it. I am particularly drawn to preserving this invaluable resource including sharks, the planet’s most misunderstood marine animal. I am a local resident, certified as an advanced and nitrox scuba diver, and a third year student at Maharishi University of Management majoring in Sustainability.”

Lisa Yeisley is a portrait and figurative artist based in Western Massachusetts, near a lake with eagles, otters and the occasional double rainbow. She’s been drawing all her life, and after a decades-long detour into the world of graphic design, she returned to full-time art making because she was tired of keyboards and screens… and she really really missed getting her hands dirty.

“My portraits reflect a lifelong fascination with human nature, and the fleeting thoughts and emotions that play across the face when it’s at rest. The advantage of portraiture is that it allows me to stare at my subject for as long as I like without getting scowled at, as so often happens in public! I prefer to work in graphite and charcoal since drawing feels more immediate to me, and these mediums enable me to explore deeply, without the distraction of color. I’ve recently begun expanding beyond strict portraiture, but the goal of my work remains the same — to convey, with beauty, subtlety and depth, a moment of pure emotion and a glimpse of the spirit of each individual before me.”