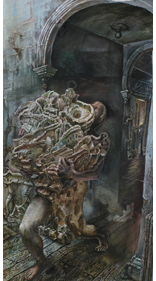 Benjamin Sears earned a BFA from RISD in illustration (1996) and an MFA in painting from Cranbrook Academy of Art (1999). He is a working artist and has exhibited throughout New England and New York state. He has been teaching since 1999 and currently teaches art at Amherst Regional High School.

In my drawings and paintings, I explore psychological spaces. These spaces are inhabited with figures and forms that are both ancient and futuristic: Two ancient beings locked in an epic battle, a battered truck stealing away under the cover of night, an empty stadium with roaming spotlights. Many of the stories that develop in my work are about core human struggles: isolation, acceptance, connection, and self-worth. Each world that I invent however strange, reminds me of something fundamentally human. Ultimately I am pursuing my own inner landscape, peeling back the layers to reveal the secrets beneath the surface of things. website: www.benjaminsears.com

Perry Carter is a self-taught painter with a background in photography and interior design. She primarily works with oil paint on archival paper, creating portraits inspired by Earth’s many creatures. Hints of surrealism and whimsy weave through the paintings. Perry’s work has appeared in magazines, newspapers, websites, and CD artwork, and she is a grant recipient from The Turkeyland Cove Foundation. In addition to her painting career, she maintains a private psychotherapy practice in Northampton, Massachusetts. website: www.PerryCarter.com

Lennie Kaumzha is a native of Illinois whose career has included teaching math in the Gambia, West Africa as a Peace Corps volunteer, and organizing poetry, music and art events as a worker-owner of the Common Ground restaurant in Brattleboro, Vermont. He studied art at San Jose State University in the 1970s and has lived in New England since 1978. He is currently a self-employed craftsman, fashioning electric and candle lanterns from recycled tin cans.

These paintings have been the work of the last thirty years. I began in the 1980s experimenting with abstract color designs. I shifted to animal themes reflecting my interest in nature, merging and intertwining the abstract shapes with figurative elements, and using black outlines to create a mosaic-fusion style. I see my color tone ‘strips’ as like notes in music: tones and half-tones, with lapping and over-lapping depths. But I also weave images into them: of nature, animal, human, and mythic beings. website: tincanlights.com/paintings.html