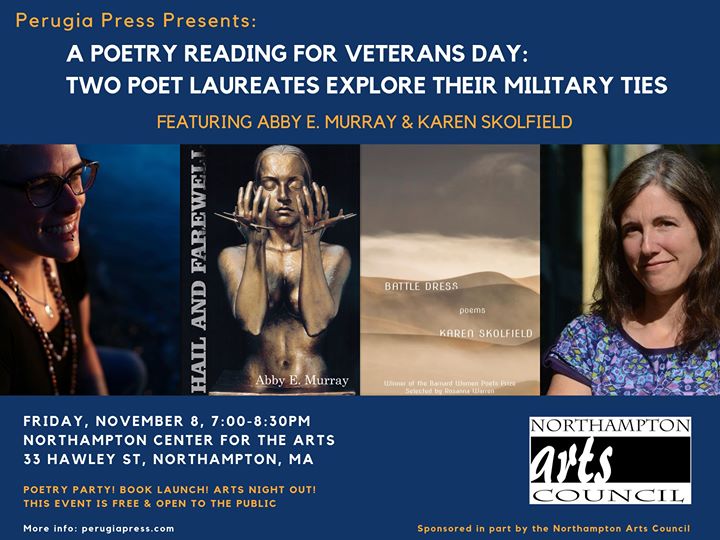 On November 8, Arts Night Out in downtown Northampton, Perugia Press will hold a poetry reading in honor of Veterans Day featuring Abby E. Murray & Karen Skolfield. Murray is Perugia’s latest winning poet and will be traveling here from WA State (where she is Tacoma, Washington’s current poet Laureate) to celebrate her new Perugia Press book, Hail and Farewell. Skolfield is a friend of Perugia Press and is Northampton’s current poet laureate. Her latest book is Battle Dress, out this fall from Norton. This event is free and open to the public, and it is sponsored in part by the Northampton Arts Council. We hope you’ll join us! Poet bios below:

ABBY E. MURRAY’S first full-length book, Hail and Farewell, won the 2019 Perugia Press Prize and was published in September, 2019. Her poem “Asking for a Friend” won the Rhino Founder’s Prize in 2018. she teaches argumentation to army officers, creative writing at the School of the Arts, argumentation in military/academic writing at the University of Washington, and poetry workshops at a detention center for detained, undocumented youth. She edits Collateral, a literary journal focused on the impact of violent conflict and military service. She considers herself part of a military family, being married to someone in the Army. She has an MFA from Pacific University and a Ph.D. from Binghamton University. Murray is the poet laureate for Tacoma, Washington, for 2019-2021.

KAREN SKOLFIELD’S book Battle Dress (W. W. Norton, 2019) won the Barnard Women Poets Prize. Her book Frost in the Low Areas (Zone 3 Press) won the 2014 PEN New England Award in poetry and the First Book Award from Zone 3 Press, and is a Massachusetts “Must Read” selection. Skolfield is the winner of the 2016 Jeffrey E. Smith Editors’ Prize in poetry from The Missouri Review, the 2015 Robert H. Winner award from the Poetry Society of America, and the 2015 Arts & Humanities Award from New England Public Radio. Skolfield is a U.S. Army veteran and teaches writing to engineers at the University of Massachusetts Amherst, where she earned her Master of Fine Arts. Skolfield is the poet laureate for Northampton, Massachusetts, for 2019-2021.