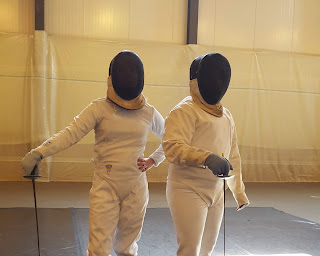 A.P.E. @ 33 Hawley and Real Live Theatre present Athena this month in the Flex Performance Space of the Arts Trust Building (33 Hawley Street). Athena, described by the New York Times as “a deadly serious comedy about ambition, success, and owning your superiority… (The New York Times, Feb. 19, 2018) is produced by Real Live Theatre, a cooperatively produced theatre company based in the Pioneer Valley of Western Massachusetts. Athena is directed by Ellen Morbyrne, stage managed by Ezekiel Baskin, and stars Rachel Hall and Syl Simmons.

Two young fencers. Once dedication to training. Endless opportunity for connection and collision. Mary Wallace and Athena are brave, and seventeen, and fencers, and training for Nationals. They practice together, they compete against each other, they spend their lives together. They wish they were friends.

Sponsored by the Pioneer Valley Fencing Academy.
33 Hawley is a project of the Northampton Community Arts Trust.