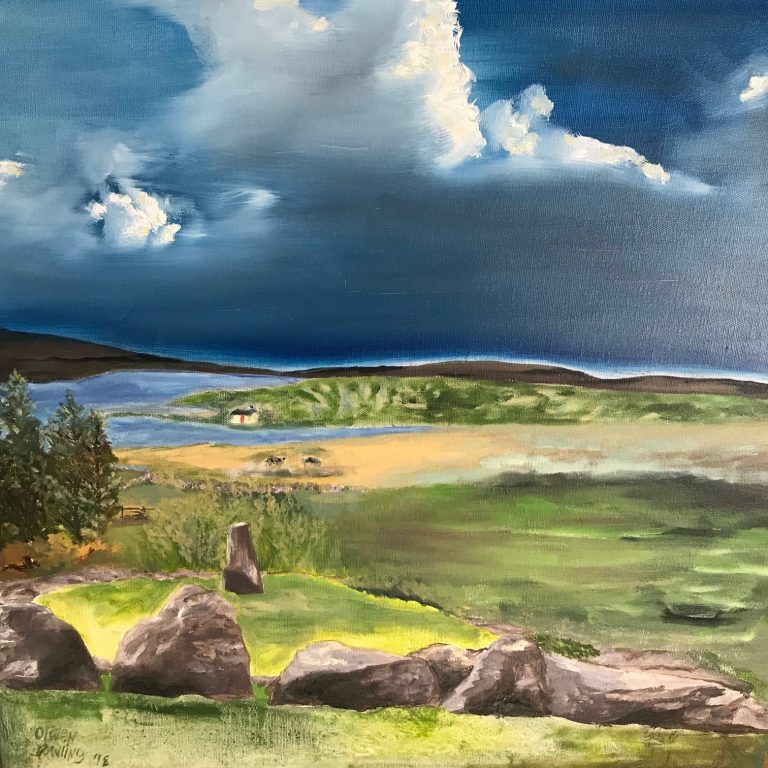 Born in England, where I spent my childhood, I lived and worked in France for two years, then came to America where my three children were born and raised. When my oldest children were in college I studied at the Swain School of Design in New Bedford, where my love of painting was regenerated. After thirty years, and some major life changes, I found myself in Northampton, where I was encouraged by friends to pick up my brushes and attend Greenfield Community College with them, which was some of the best advice of my life.

When I took up my brushes again, following a thirty-plus year hiatus, it took me a while to develop a style and process with which I felt comfortable. Now my brushes move the paint around more freely than before, offering a looser interpretation of the image I want to convey. Using my own photographs as reference allows me to wallow in memories, recalling intimately the light, sounds and overall ambience of any one particular scene. There was a special beauty to be found in Florida, where I lived for a few years, and some of my work hails from there and various vacation locales. The landscape never rests, and so provides a constant source of inspiration.

Living in the Valley is a blessing, and to share it an honor. There is such peace to be found within our parks and beside our rivers and ponds, and pleasure in watching the play of children. There is also a sense of quiet beauty in the solitude of tidal flats and estuaries, and in sites of abandonment. Never truly faithful to the photograph, I must admit to employing artistic license in some of my work, omitting or shifting subjects and objects in order to make the painting work as a whole.

Olwen was born in Dublin, Ireland and emigrated with her family to the United States. She grew up in Malibu, California. Her primary inspirations in art are Mary Cassatt, Richard Diebenkorn, and Winslow Homer. Olwen paints images in oil and watercolor of the West of Ireland, as well as, North Chester where she lives in the Berkshire mountains. She is also a printmaker in Intaglio and is a Member of the Zea Mays Printmaking Studio. Olwen is also a member of the National Association of Women Artists.

Olwen’s paintings are in private collections in the United States and Europe. In recent years, she has exhibited at The James Joyce Gallery and The Hallward Gallery in Dublin, Ireland; Smith College Alumnae Gallery; Hosmer Gallery Northampton MA ; The Watkins Gallery Northampton MA. Olwen’s intaglio artwork is represented by the Zea Mays Flat File Project and her recent print work has been represented in group shows at the APE Gallery in Northampton and The Ferrin Gallery in Pittsfield, Massachusetts. At The Lenox Gallery Massachusetts Olwen received Honorable Mention in the Fem in Art Show. Olwen has also worked for over two decades in the professional theatre. She has designed scenery and backcloths for theatrical productions. For the past 20 years, Olwen has been producer, managing director, production manager and stage manager for professional theatrical institutions, as well as director of The Northampton Center for the Arts. She graduated as a Studio Art Major with a minor in Biology from Smith College in Northampton, Massachusetts. Olwen has also studied at L’Ecole d’Art, Vallauris, France and the Sun Valley Arts Program in Hailey, Idaho. Olwen is currently represented by her own gallery in North Chester, Massachusetts and works as an arts consultant. Olwen lived for ten years in Cleveland, Ohio where she was Production Manager at The Great Lakes Shakespeare Festival and helped move the company downtown Cleveland to Playhouse Square.

This exhibition PATTERNS AND LIGHT has work both in oils and watercolors that have a similarity. I was in interested in painting in oil on canvas using the same layered patterns that I have used in my watercolors. You will also see some new work in watercolor which is influenced by my interest and love of plants and nature. I have also snuck in a painting of Cashel, County Galway – one of my favorite places on the planet. Enjoy!