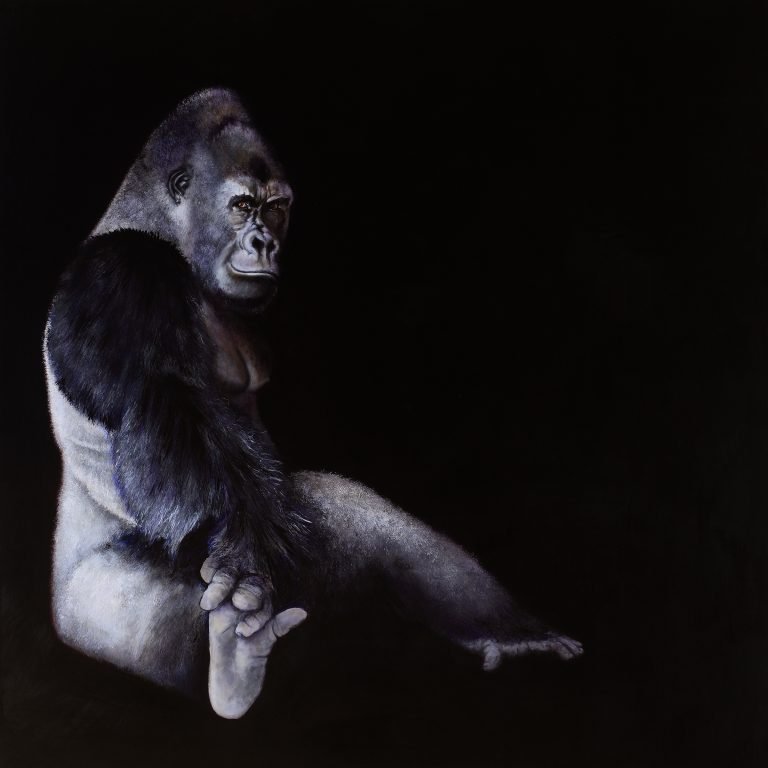 From December 6 – 31, 2018, A.P.E. Ltd. gallery will present a series of paintings by Dawn Howkinson Siebel. The exhibited works are part of a project Siebel began developing in 2012 of painting portraits of endangered species.

The paintings do not stem from found images, but rather are the result of a personal encounter with each of the animals portrayed. Siebel spends extended periods of time in zoos sitting with, watching, and learning from and about the species she paints. This research is brought back into her studio, where Seibel paints a portrait that is just as much a record of the emotional memory of meeting her subject as it is based on photographic and informational documentation of her time with them.

The species are sitters for their portraits, not objects of study, and each portrait looks back at the viewer, asserting presence, individuality, and agency. By painting portraits of endangered species, Siebel emphasizes the human responsibility for their endangerment and argues for their right to exist as being equal to our own.

Dawn Howkinson Siebel Bio
Dawn Howkinson Siebel was born in Lake County, Indiana in 1950. Trained as an actress at Carnegie-Mellon, she moved to New York City in 1972, earned a Broadway credit, and lost interest in a theater career. She fell in love with batik at a class at the New School, and subsequently spent 12 years as a dyer. She has a t-shirt in the collection of the Smithsonian Institution and in 1985 sold her collection of hand-painted silk kimonos to Bergdorf Goodman. She then embarked on an 18-month trip around the world with a set of watercolors in her backpack, a medium she loved for its fluidity, translucency, and retention of white as a negative space. She continued to paint upon returning to New York while simultaneously working in publishing.

In 1994, she moved to Boulder, Colorado, and there, in a community of working artists, finally devoted herself fully to art. Oil became her medium of choice in 1998. In 2009, she began Better Angels, 343 oil portraits of the New York City firefighters who died on 9/11. Partnering with the National Fallen Firefighter’s Foundation, she moved back east in 2010 to complete the components of what became a national traveling exhibit. Resettling in Easthampton, Massachusetts in 2012, she began painting portraits of endangered animals, a selection of which comprising this exhibition at A.P.E.