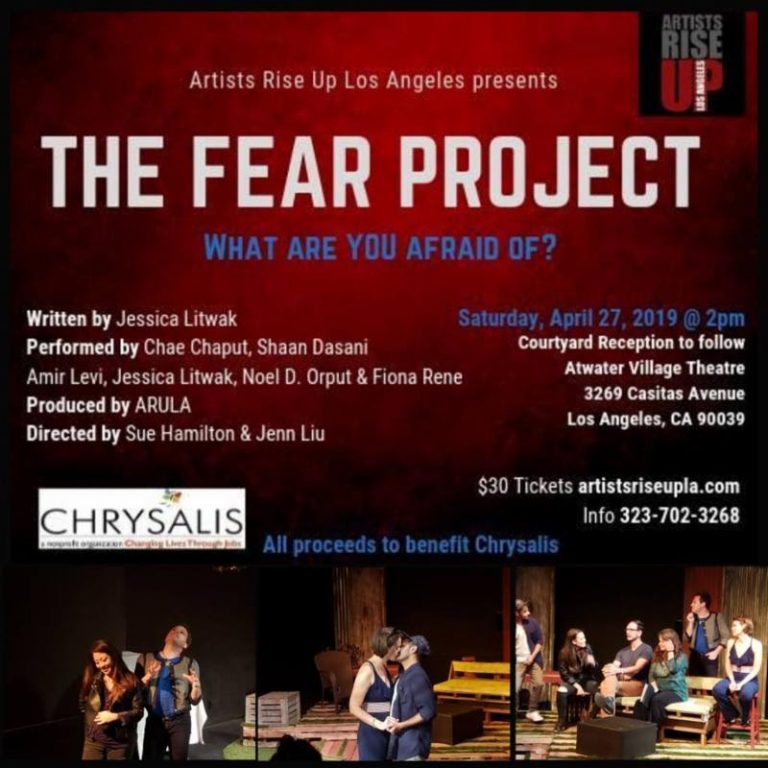 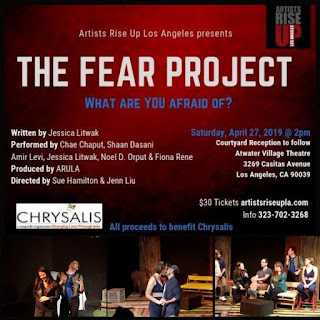 Theatre artist Jessica Litwak, presented by Serious Play and coming to Northampton in June/ the Arts Trust, 33 Hawley with her new play THE WALL, is always on the move with her in-depth theatrical investigations, both here and abroad, asking questions and encouraging conversations.. BESIDES recently creating THE WALL, which she will be sharing with Valley audiences, she has been developing THE FEAR PROJECT nationally and internationally.

For insight into what moves Jessica to create with others, read more about THE FEAR PROJECT and her process in an excerpt from Drama Therapy Review, 2018…

THE FEAR PROJECT- in L.A.

During The Fear Project process, I navigate four roles: researcher/scholar, drama therapist, activist and theatre artist. In the pre-show act of collecting the data, I work as a researcher/ scholar, and also a drama therapist with interviewers and performers. During the creation of show, devising, writing and rehearsing I can be a drama therapist building community with actors and an activist by continuously focusing the mission of the show on paradoxical curiosity with the goal of advocating unity across cultural/ generational/ gender/ ethnic borders. I then am first and foremost a theatre artist (playwright, director and performer) when staging, directing and writing the play. In the post-show conversation, I come back to my role of drama therapist holding the space, working to make it a safe forum for everyone in the room to feel comfortable sharing. My training as a drama therapist enables me to read a room and know when a conversation has gone too far or when someone wants to say something that they are afraid to say, when someone feels overwhelmed by a subject or if someone needs to be approached after the group discussion and asked is s/he wants to have a private conversation.

I first developed the project in Prague at The Alfred Theatre, and then created a version of the play at the Sagbahar Theatre Festival in Kolkata, India, the next variation of The Fear Project was developed through a US State Department Arts Envoy grant and performed throughout the Czech Republic. It was produced in New York at La MaMa with Artists Rise Up New York and at Dixon Place in conjunction with the International Human Rights Arts Festival. It was also developed at The University of Wisconsin, Milwaukee. I have taught workshops in The Fear Project at The North American Drama Therapy Association conference, a Cultural Diplomacy session at the United Nations, and at the International Leadership Association conference. The questions have been used to develop original work at La Mama’s Director’s Symposium in Umbria, Italy. My cast from The Czech Republic is developing The Fear

Project for high school audiences, Roma youth, and at-risk young adults. I am hopeful that others will use the questions, the format and the process to spread the opportunity for connection and the opportunity for dialogue. I think this project could work in many settings I am interested in bringing it to areas within the United States where the divides between red and blue, black and white, man and woman are creating unhappy chasms. I think The Fear Project is better suited to be conducted by artists or drama therapists than researchers who have not had experience conducting emotionally charged research using creative tools, but with brief trainings, I think this work can be led and developed by anyone.

In the end, the question at the heart of this project was can a theatrical event like The Fear Project inspire audiences and participants to becomes more aware of their fears and to address them? Lederach states, ‘If we are to survive as a global community we must understand the imperative nature of giving space and to the moral imagination in all human affairs […] we must imagine beyond what is seen’ (2005: 354). By exploring diverse sides of the political spectrum through interviews and fictional characters, I believe we can imagine empathy and move towards healing our fear of the other. In his book on leadership, Senge (1994) describes tribes of Northern KwaZulu-Natal in South Africa, where the typical salutation is ‘Sawu Bona’ (www.intellectbooks.com 269) instead of ‘Hello’. The phrase means ‘I see you’. The common rejoinder is ‘Sikhona’ which means ‘I am here’. In this culture, until someone sees you, you do not exist. From the conversations I have had with artistic collaborators and people who have been interviewed, I have heard many accounts that lead me to believe that both the interviewee and the interviewer in The Fear Project have a profound experience of being seen. A. G. Johnson stated, ‘Of all human needs, few are as powerful as the need to be seen, included, and accepted by other people’ (2006: 58). The relational aesthetics of The Fear Project insist that the art reflects and prompt interconnectedness (Sajnani 2012). The desire for change can be born out of fear or fury, but the ability to construct and maintain positive change must be supported by truth. Without looking at our feelings of fear and anger we cannot move beyond them. The tyranny of the past can interfere with the ability to pay attention to new situations (Van der Kolk 1996). The Fear Project allows artists and audiences to face feelings and situations they may have long buried. After truth, the next requirement of change is hope. Hope can be found in community with fellows who empower each other by listening. Passive powerlessness, which undercuts resistance, and leads to isolation and the experience of feeling inadequate and impotent (Kegan and Lahey 2009). But the rigorous work of imagining, which is a central tool of theatre making, opens people to potentially peaceful and beautiful change. The Fear Project inspires collaborative action through the radical intimacy of socially engaged performance (Sajnani 2012). As theatre practitioners, activists and researchers we can encourage an imaginative exploration of even the darkest truths to facilitate communication and transformation. We are not afraid, even of fear. It all begins with a question.

Jessica Litwak in THE WALL

SHOW INFORMATION FOR THE WALL

Please stay for post- show discussion each evening, and

please forward this e-mail to a friend, or anyone you know who may be interested!

Serious Play Theatre Ensemble is based in Northampton, where it was founded over 25 years ago. The company works to create a dynamic integration of movement and text, and has a history of engagement with ensemble- created new work that is informed by contemporary issues. Productions have toured to NYC and Boston, and to Athens, London, Edinburgh and to the JoakimInterFest in Kragujevac, Serbia, where its production of the politically charged Milosevic at the Hague, won an award for “dramatic innovation and theatrical boldness”. Serious Play is a member of the Network of Ensemble Theaters, & is an artist associate with A.P.E., a member of the Northampton Community Arts Trust.