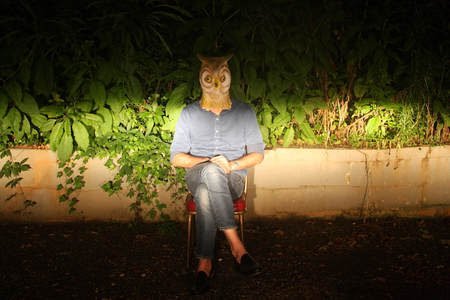 The Cardboard Sea Theatre Company of Asheville, NC, brings its original new play The Amendments to Northampton, MA. The Amendments premiered at the Magnetic Theatre of Asheville, NC in August of 2016. Following a two-week residency in Western Massachusetts, the Company will present 3 performances of their play specifically adapted for the small experimental performance space at the Anchor House of Artists.

The Amendments begins as with a conventional story that quickly flies off into a surreal world. The night before her father’s funeral, Judith returns home to collect one minor item from his estate, but her estranged brother Gabe has already laid claim to her treasure, and he has an amended will to back him up. As the night stretches on, Judith is forced to deal with the fact that the past is never past. We can bury it, but it always comes back to haunt us. The play is a theatrical shotgun blast taking aim at the uncomfortable truths that pierce the hearts of embattled family members.

The Cardboard Sea is now in its fourth year, but the founding members have collaborated since 1994. Influenced by theatrical pioneers like Sam Shepard and Tennessee Williams, with a healthy dose of the cinematic Quentin Tarantino, Jeff Donnelly has crafted a body of work that invites audiences into the intimate and volatile experience of live performance. As for director Todd Weakley, Bertolt Brecht, Joint Stock Company, and modern ensembles like Pig Iron Theatre, Rude Mechanicals, and Missoula Oblongata have led the way.
With a commitment to the transformative nature of live performance, a belief in the collaborative process, and a magnetic obsession for storytelling, The Cardboard Sea seeks to activate, engage, surprise, and provoke audiences into new and challenging territory. We aim to: produce works of social significance, highlight the constructed nature of the theatrical event, and provoke self reflection and critical perspectives.