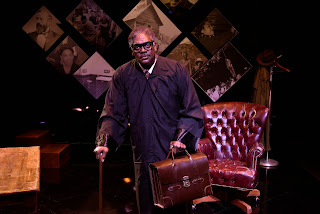 The Academy of Music Theatre will present the New Repertory Theatre’s production of Thurgood on Friday, February 16 at 7:00pm. The performance will be held at the Hampshire Council-Gov Courthouse in Northampton. Audience members will sit in the courthouse viewing seats as actor Johnny Lee Davenport portrays the role of Thurgood Marshall in one of the “greatest performances of the year” (Boston Post-Gazette).

Written by the 17-time Emmy-winning playwright George Stevens, Jr., directed by Benny Sato Ambush and featuring actor Johnny Lee Davenport, Thurgood spans Justice Thurgood Marshall’s impressive career as a lawyer, arguing such landmark cases as Brown v. Board of Education, and is a remarkable tribute to Marshall’s enduring legacy as the first African-American to sit on the Supreme Court.

Thurgood will run for one night only on Friday, February 16, 2017 at 7:00pm. Adult Tickets are $20 (plus applicable fees). The event will be performed at the Hampshire Council-Gov Courthouse in Northampton at 99 Main St., Northampton, MA 01060.

“Davenport has the kind of ineffable stage presence that can’t be adequately described but needs to be experienced. – The Boston Globe

“A powerful reminder that one man can make a difference.” – Broadway World

“One of the great performances of the year.” – Boston Post-Gazette

Tickets can be purchased by calling or visiting the Academy of Music Box Office. We are open Tuesday- Friday 3:00PM-6:00PM and can be reached at 413-584-9032 ext.105. Tickets can also be purchased online by visiting www.aomtheatre.com.