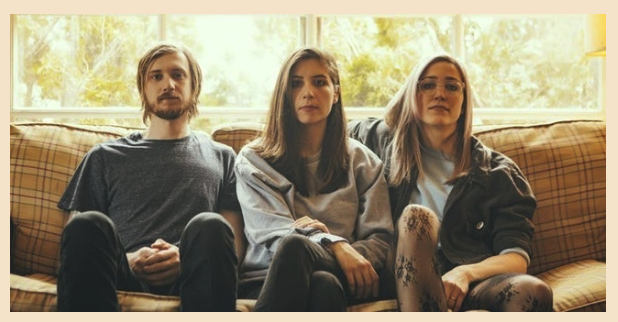 Weakened Friends
100 or so miles north of Boston, you’ll find Portland, Maine.
Among its many awesomely quirky attractions (beyond dope AF lobster rolls, of course), the mini-metropolis boasts the International Cryptozoology Museum and even served as the site of the nation’s first chewing gum factory. Suffice it to say, the town possesses all kinds of character and charm. It also makes perfect sense as HQ for Weakened Friends.
Three alternative rock wiseasses and snack food connoisseurs, the trio—Sonia Sturino [vocals, guitar], Annie Hoffman [bass], and Cam Jones [drums]—first congregated in their adopted hometown during 2014. Sonia had recently relocated from Toronto and holed up in a house with Cam and a bunch of other dudes before witnessing Annie play live and asking her to join the band. As they released two independent EPs, Gloomy Tunes and Crushed, they stirred up a palpable buzz (between consuming sour spaghetti and causing trouble). Gigs followed with everyone from CHVRCHES and Silversun Pickups to Beach Slang and Juliana Hatfield as they made their 2017 debut at SXSW and earned praise from Vanyaland, CBS, If It’s Too Loud, and many more. A wiry, whimsical, and wild fusion of disarmingly pop hooks and fuzzed-out riffery that wouldn’t be out of place on the Reality Bites soundtrack or in a modern Brooklyn bar fueled this quiet rise.
“If something is ear catching and interesting, I’m drawn to it,” says Sturino. “I love pop hooks, but I have this truly weird and shaky voice. I started to embrace that, and I think people connect to the sound.”
For the uninitiated, they’ll definitely connect to the group’s 2017 single “Hate Mail” featuring J Mascis. On the track, a buzz of feedback slips into melodic guitar and an unshakable rhythm as the frontwoman captivates with the confessionally catchy refrain, “I hate everything you’re saying, get away from me. I hate everything we’re doing, it’s a waste of me.” It’s the perfect backdrop for an epic Mascis cameo.
“It’s about when I was miserable in this other band,” recalls Sturino. “This is the most important thing to me. I don’t live comfortably. I don’t have a lot of money. I don’t have a lot of free time, because I’m putting all of my effort, passion, and self into music. So, it has to be the right situation. At the time, I just wasn’t working with the right team. The song is about those corrosive relationships with emotionally abusive assholes. J is a guitar god for indie rock. He’s an obvious inspiration, and he killed it.”
“Hate Mail” hints at a lot more to come from Weakened Friends. For Sturino, the band brings everything full circle. In tow with her best friend Cam and wife Annie, she encodes a powerful message in the lyrics.
“A lot of times, you hear expressions like, ‘Find your happy’,” she leaves off. “I think you should find yourself. Our music is about self-awareness and finding that. Sometimes, you’re having a shitty day. It can be hard, and that’s beautiful in its own way. In the North American mentality, if you’re depressed or sad, you have to just get rid of it. This is less about getting rid of that feeling and finding those things causing the feeling and dealing with them. It’s self-awareness, believing in yourself, finding yourself, and defining how you feel. That’s what this band is to me.”

Jake Mckelvie And The Countertops
Jake McKelvie tours around the country both as a solo act and with his band, The Countertops. Having self-released numerous full-length albums and EPs over the years, he has carved himself a niche as a songwriter, combining a rapid delivery with stream-of-self-consciousness writing in a manner so singular that it is never in question whose songs are being played.