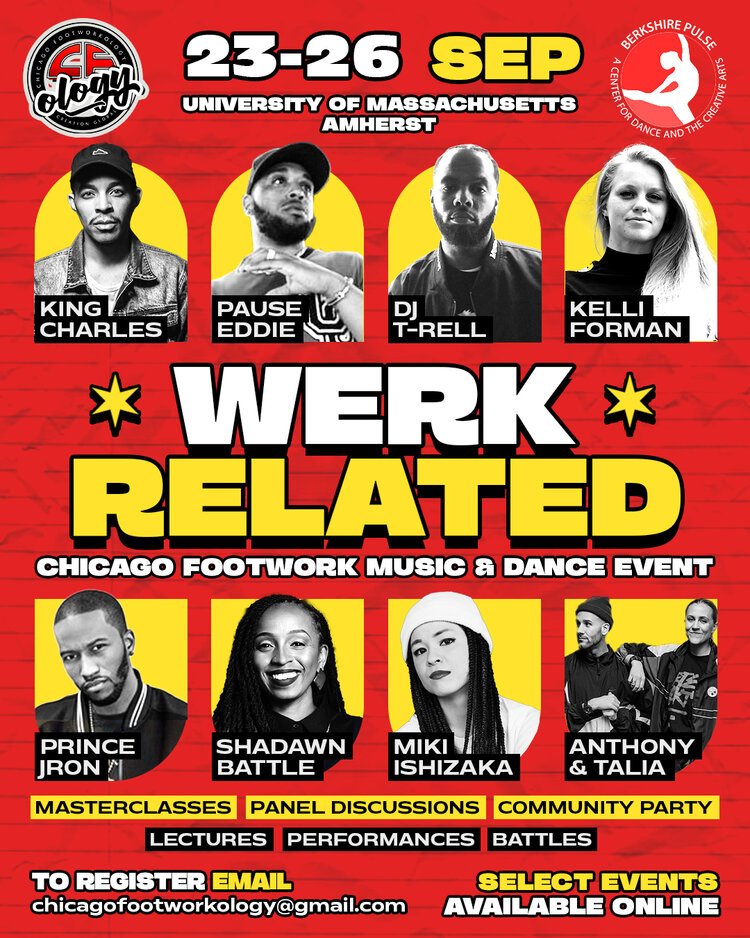 Werk Related is a four-day conference and workshop series about Chicago Footwork music and dance culture happening September 23rd through September 26th. The University of Massachusetts Department of Dance and Music will be partnering with the Five Colleges Music and Dance Department, Chicago Footworkology, and other community organizations to host seven guest master artists from Chicago to share their expertise and personal history with Chicago Footwork. Through a series of dance and music workshops, panel discussions, and performances, students and community members will better understand the roots and artistic practices of Chicago Footwork. Werk Related will highlight the rich history and people of Chicago Footwork culture, and works to create bridges and conversations in University and other community spaces around race, culture, honoring African-American art forms, and the importance of building a diverse artistic community both locally and globally.

Chicago Footwork is a dance form that was created by the African American community in Chicago during the 1990’s and evolved into a highly complex technical battle style. The music used for Chicago Footwork maintains an average of 160 beats per minute, and the very rapid dance movements of the form reflect that speed. Music used for Chicago Footwork sessions, performances, and battles is a blended style of electronic dance music in direct lineage of House music (which originated in Chicago), Ghetto House tracks, and Juke tracks. Chicago Footwork upholds the concepts of battle clique culture, honoring multi-generational dance lineage, and developing personal dance style within a crew style. Due to the high rates of gun violence in Chicago, it is a very common phrase to hear a footworker from Chicago say: “Footwork saved my life.” Within the last decade, the dance has moved from existing only in Chicago to being featured world-wide on performance stages, music videos, commercials, movies, television, and dance conferences.